To all MICCAI Society Members and Colleagues

It is with great sadness that we announce the passing of Christian Barillot, a distinguished and highly respected researcher and active member of the MICCAI Society.  Prof. Barillot was a MICCAI Fellow, General Chair of the MICCAI 2004, conference, and Program Co-Chair of MICCAI 2013 and 2014.  Above all, by many of us, he will be remembered as a very pleasant, energetic, and positively spirited colleague and friend. 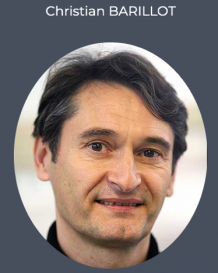 Prof. Barillot was born in in France in 1959. He obtained his Ph.D. thesis from the University of Rennes I on “Information Processing” in 1984 and his  “Habilitation” thesis in Computer Science  in 1999. He was was appointed as a tenured Researcher in 1986 from the CNRS (National Center of Scientific Research of France). In 1987, 1988 and again partially in 1991, he was research fellow at Mayo Clinic, Rochester, and worked with Prof. R.A. Robb.

Between 1988 and 1996 he worked at the SIM Laboratory and the INSERM U335 unit at the University of Rennes I. In 2003, he was a visiting professor at the Robarts Research Institute, Western University, London, Canada collaborating with Professors T. Peters and A. Fenster. He joined IRISA in 1996, collaborating first with the VISTA Team.

There is a website for collecting messages: http://www.irisa.fr/Christian.Barillot
Developed by iGraph